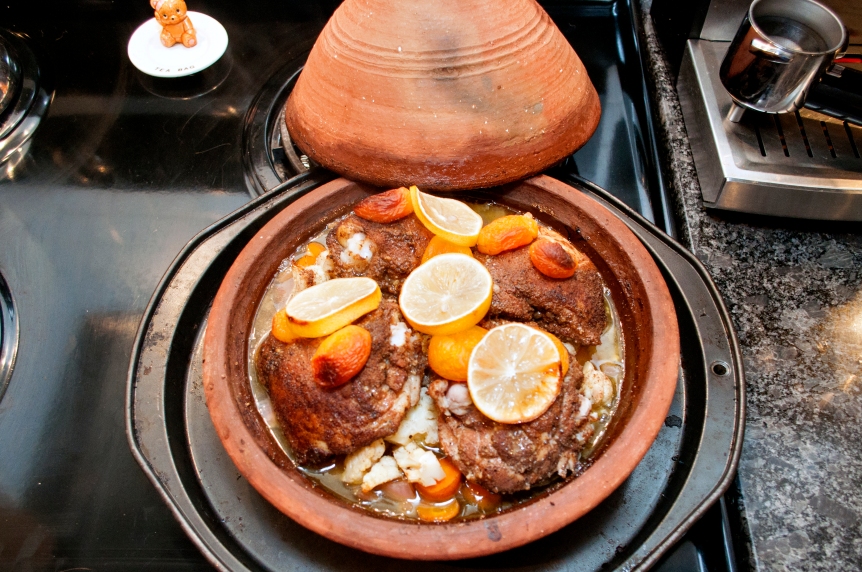 Our friends came back from their honeymoon in Morocco with a fantastic clay tagine for us. A tagine in a type of earthenware cooking pot with a conical lid made to keep heat and moisture in the food as it slowly cooks.

The tagine has been used historically in North Africa, due to it’s unique ability to trap steam and moisture … a very practical thing when you’re living in areas where the water supply is limited

For this recipe we do recommend a tagine, but any deep, oven-proof, dish with a cover can be used! 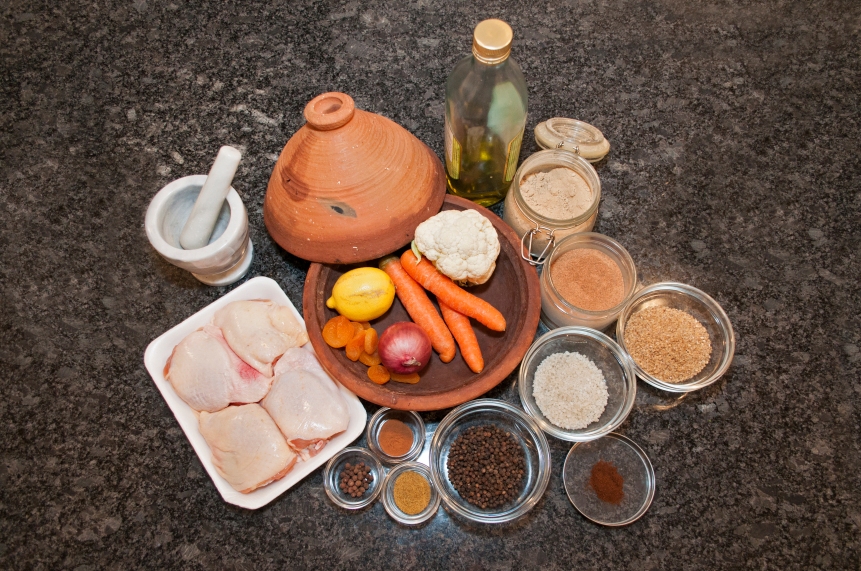 So, for this recipe you’ll need the following:

Spices are key to North African cooking. Although you can buy spices that are already ground, I’d suggest buying whole spices and grinding them yourself with a mortar and pestle like you see pictured above.

Freshly ground spices have much more flavour and the aromas you’ll get while grinding will give you a greater knowlege of what each spice is adding to the mix.

Spice rub is created by just combining the ingredients and mixing well. 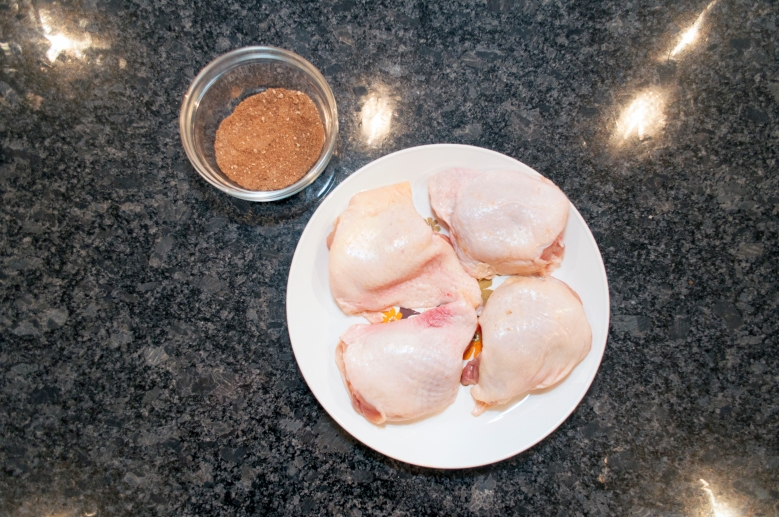 Now, go get those chicken thighs and the spice rub you just made.

Pour the spice rub over the chicken thighs 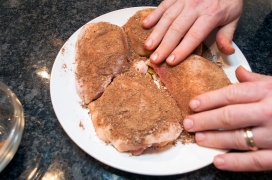 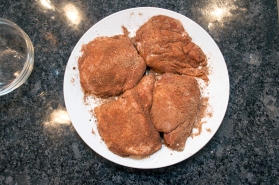 Rub in the spice rub … why did you think we called it that? Make sure chicken is entirely coated! 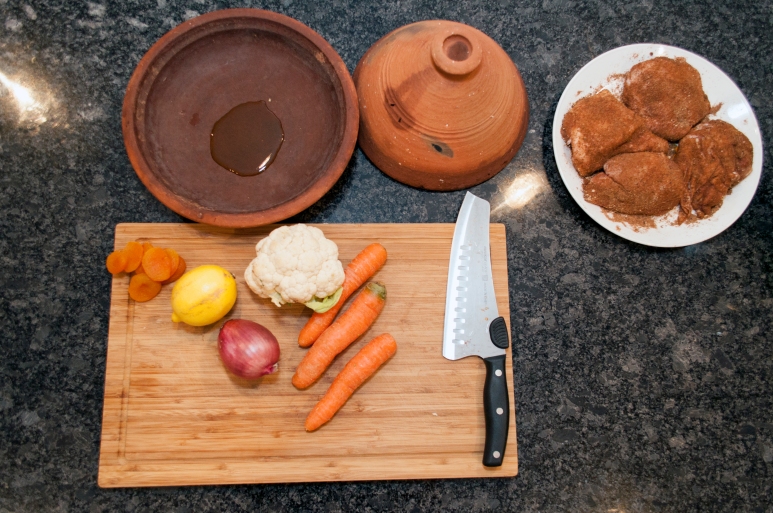 Now, coat the bottom of your tagine with olive oil. 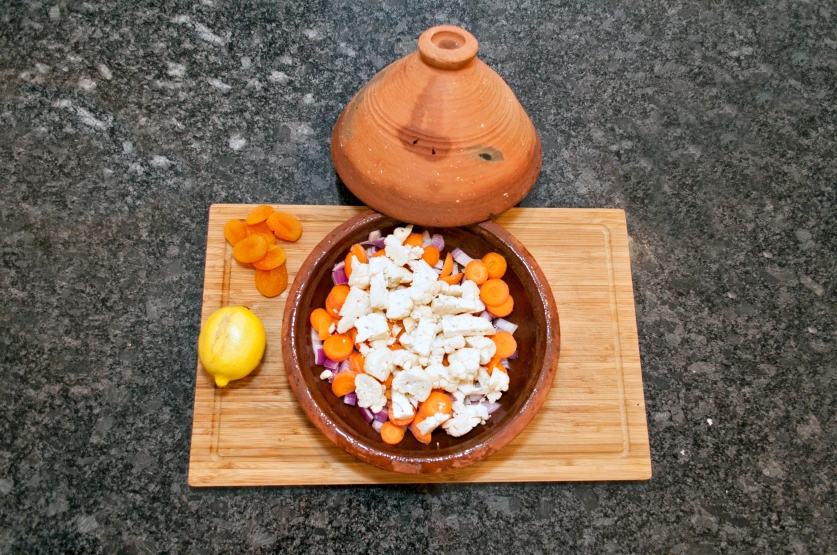 Chop the carrots, onion and cauliflower and add them to the tagine. 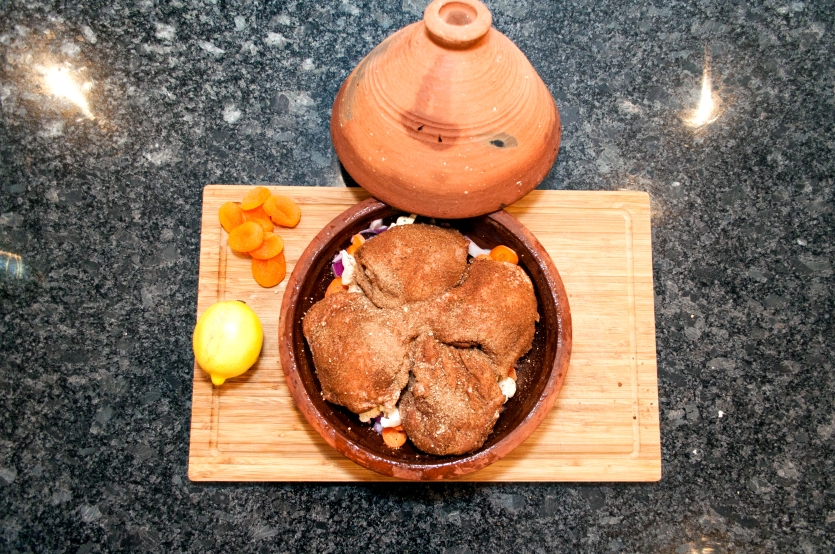 Place the chicken on top of the chopped vegetables. 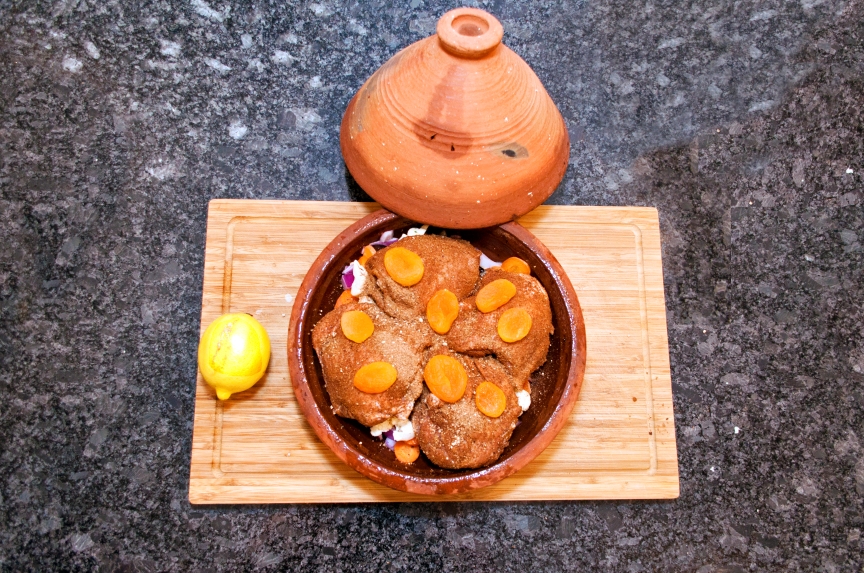 Put the dried apricots on top of the chicken thighs. 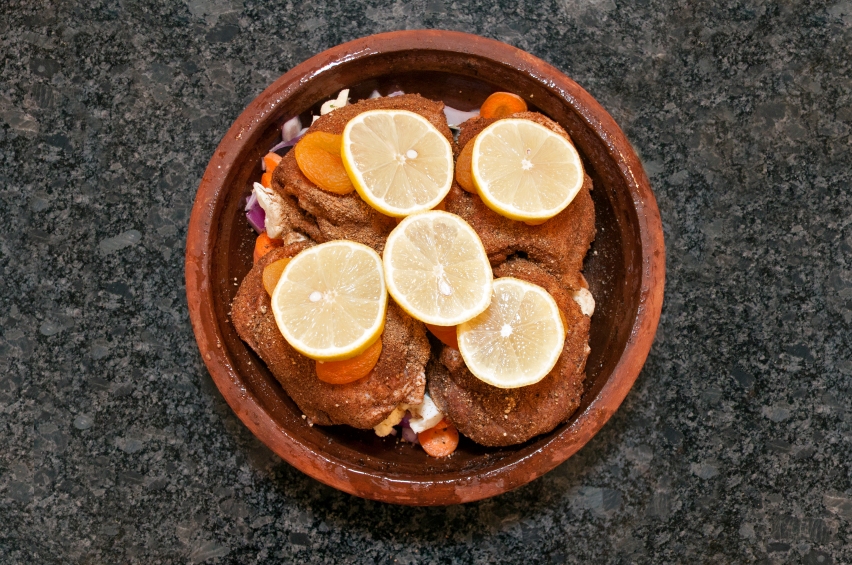 Slice the lemon and place the slices on top of the chicken thighs as well! If you want you can add a little water or chicken stock to the bottom of the tagine, but it’s optional.

Now, we have to finish preparing the tagine itself! 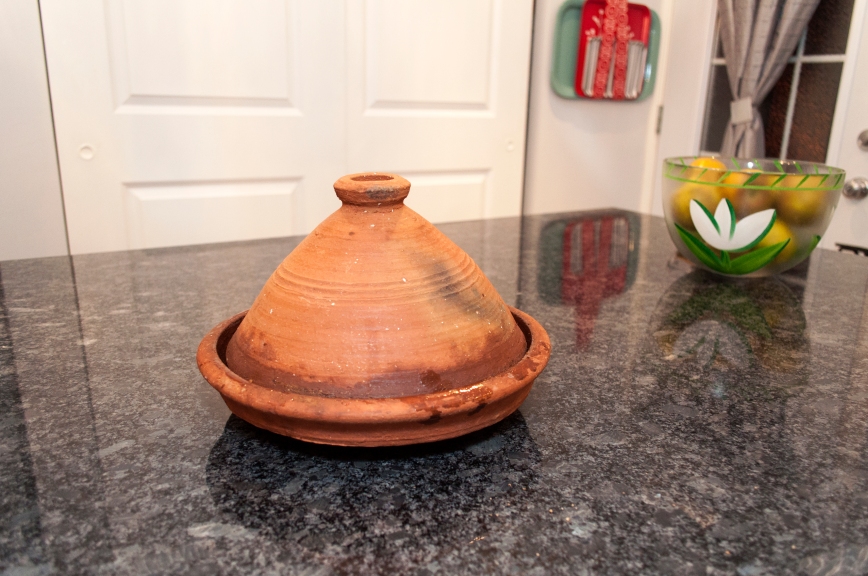 Now your tagine is ready to go into a cold oven. Since the tagine is clay, it must never be placed into a hot oven,

Place the tagine on a baking sheet (to make it easier to take in and out) and put it in the oven. Heat the oven to 325-350F

Let the tagine cook for at least an hour … 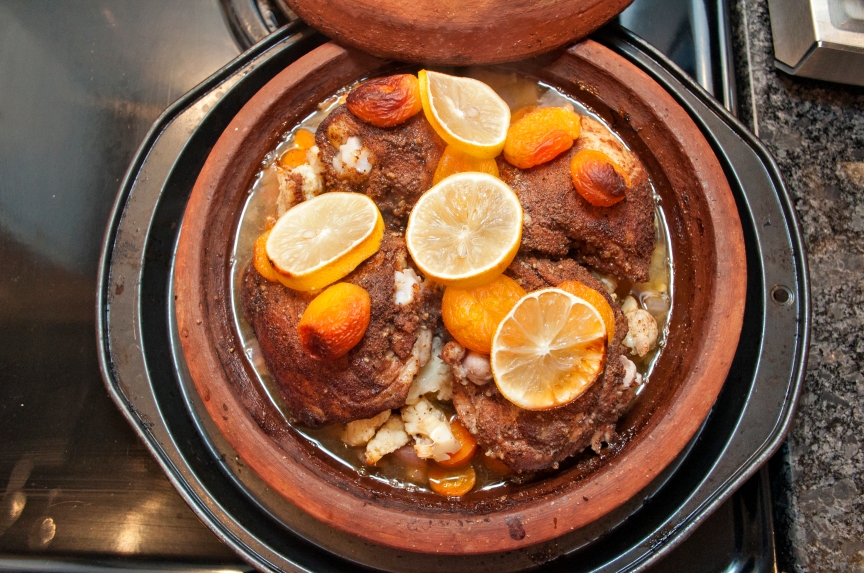 And through the magic of the internet and hour has passed and here’s your finished tagine! 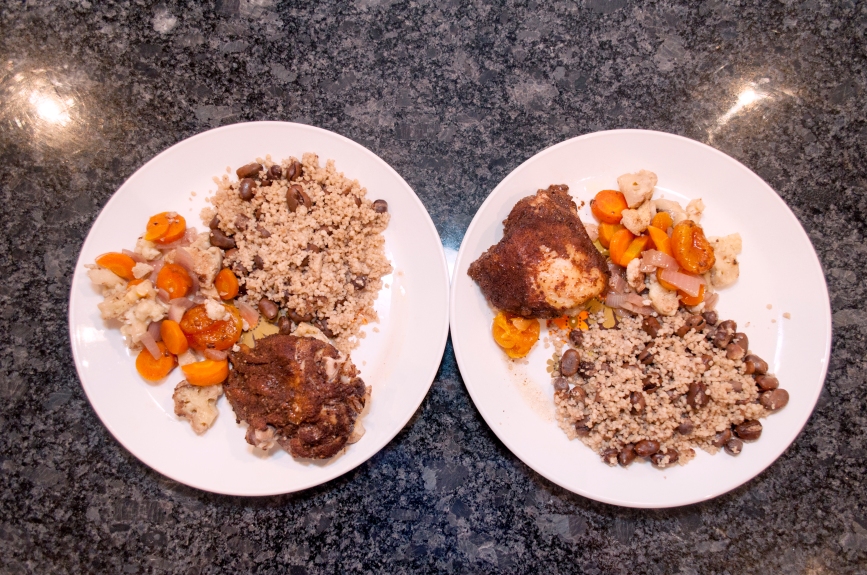 I’d recommend you serve it along with some couscous. Here I’ve added some chick peas and fava beans to the couscous.

If you live in the Montreal area, we’ve found the best place to find any ingredients for Middle Eastern/North African cooking is Adonis Market! 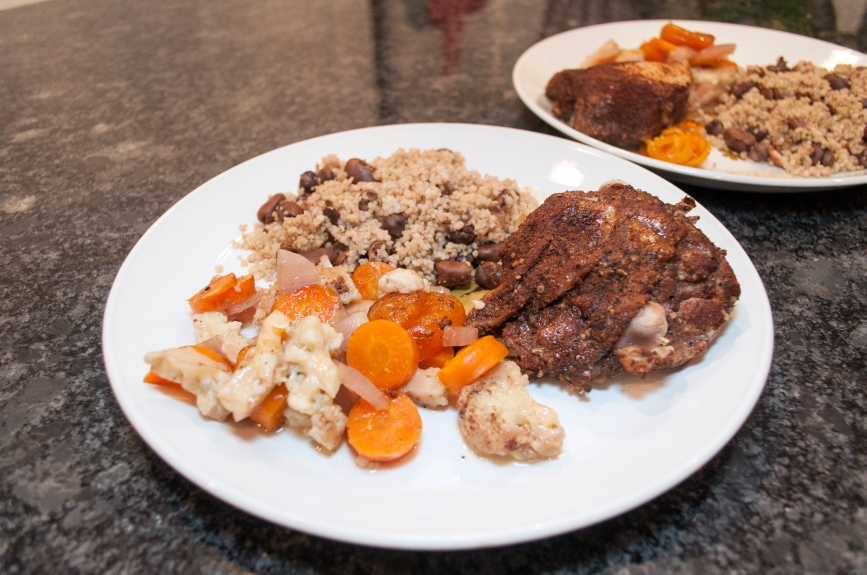 There you have our Chicken Tagine!

As always, feel free to make this recipe your own and let us know the results!