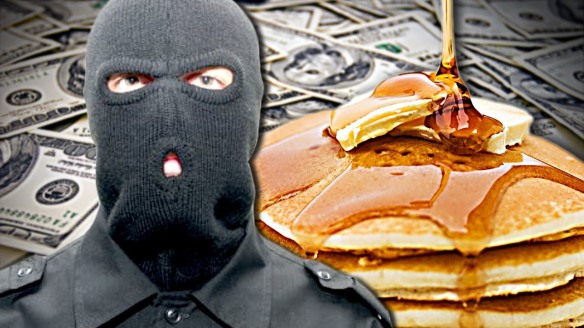 Maple syrup here is a serious deal. A few years ago, there was a heist at the Quebec Strategic Maple Syrup Reserve … I know, you don’t believe me. It happened in 2012 and you can read about by following the link!

This is about 2 minutes from our front door … close down the streets, have a festival

If you really want the full maple syrup experience (and really, who doesn’t?), you want to get outside of the city and go to one of the many cabane à sucre located through out Quebec.

Growing up in Ontario, we had “sugar shacks”, which is the translation in words only. You’d go, you’d see how they make maple syrup now and how it was done in the ‘olden days’, then you’d buy some maple candy, possibly get pancakes, go for a hay ride on a horse drawn cart and go home.

Quebec it’s a full experience, with a huge traditional meal (followed by dancing in the discotheque … yea, it’s about as amazing as you’d imagine!) 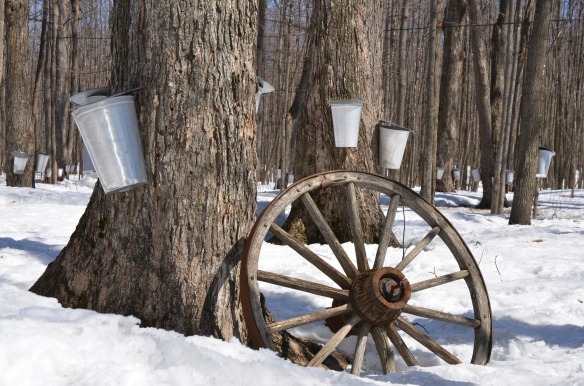 Of course, you’ll be greeted by the image of thousands of buckets tapping thousands of trees … the old wagon wheel thrown in there for atmosphere?

But it’s inside the cabane that you’ll find all the treats!

First of all, most cabanes are designed so it will feel like a home meal. Big long tables, communal seating. 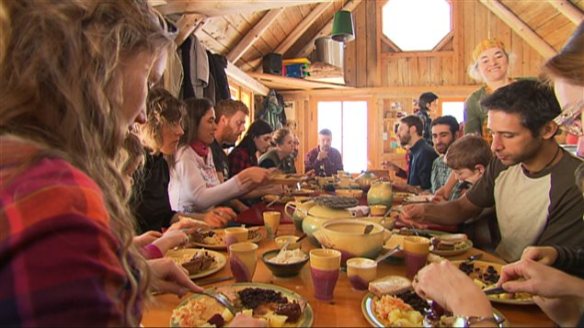 Now, let’s look at the food you can expect … other than maple syrup

Now, if you understand French, you may be a bit concerned about eating Christ’s ears … don’t worry, these are just pork jowls that are deep fried until super crispy, and then you drizzle maple syrup on them. Yes … a wonderful crunchy, salty, sweet treat that only Quebec would figure out!

The final treat of the night is tire sur neige or tire sur neige d’erable or tire de neige … any way you call this, it’s just this … you take hot maple syrup and pour it on snow …

Then, you let it cool for about 30 seconds, place a stick on the cooling maple syrup, and start to roll it up.

Pure maple taffy on a stick … 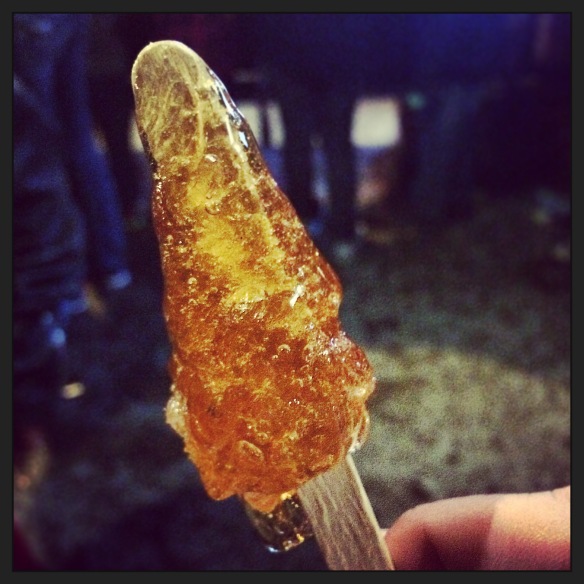 So good, you may want to steal millions of dollars worth of maple syrup from the strategic reserve … see, now it all makes more sense!

Paella is a both the name of the dish and pan in which it’s cooked. Originally from the Valencia region of Spain, Paella quickly became a national dish. Each region prepares it using different ingredients, thus insuring that whatever ingredients you use, there will be a Spaniard telling you that you’ve done it wrong! (Canadians are this way when it comes to poutine)

So, let’s see how this Canadian prepares it!

Basically, you can play with the ingredients, as long as you have the rice and the saffron 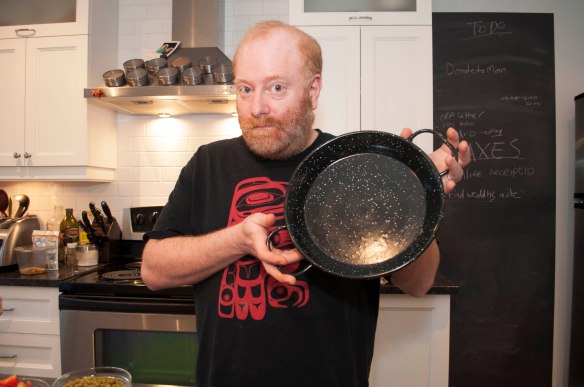 Oh yea, and a paella. It can certainly be prepared in a large skillet, but the pan is what makes it paella. You can get them in most kitchen stores. I got mine in Madrid, but I’m sure you don’t need to travel that far.

Add some olive oil to coat the pan. Put at medium heat.

Stir and get the chicken cooking

Cook the chicken until it’s mostly cooked through

Cook until the onions start to get a bit clear

Mix it all together, let it heat through

Add the rice. Stir it all together 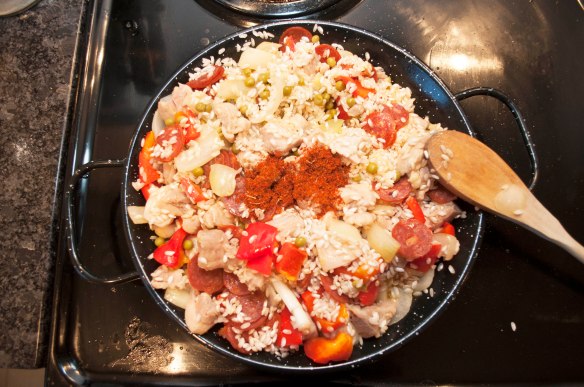 Cover the entire dish with chicken stock … really fill the pan, as the rice is going to absorb it

Get the dish simmering

Okay, so here’s where we get away from a risottto …

Cover the paella with foil and let it simmer over a low heat for about 20 minutes. You can test the rice and add a bit more stock during this process if you think it needs more, but DO NOT stir it. One of the distinctive traits of paella is the rice on the bottom should be toasted and have a crunch. You want to let this sit! 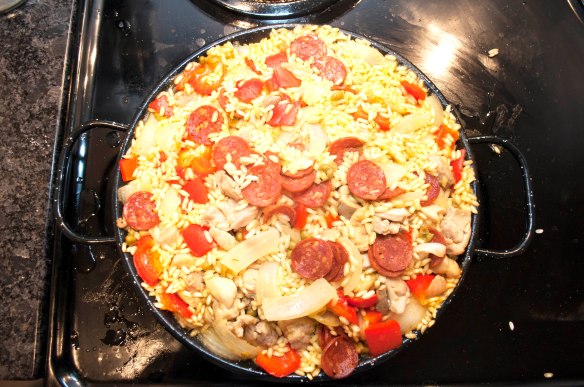 Now, let’s get this to the table 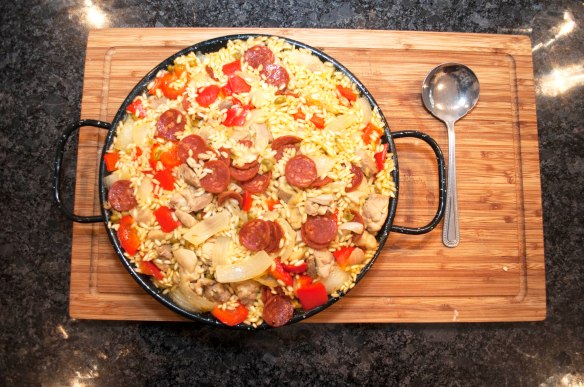 Paella should be served at the table, right from the pan to your dish. This pan is for making a 2 person portion. You can get anything from single person to like 10 person sized pans! (Large pans must be prepared outside, over a fire … the real traditional way!) 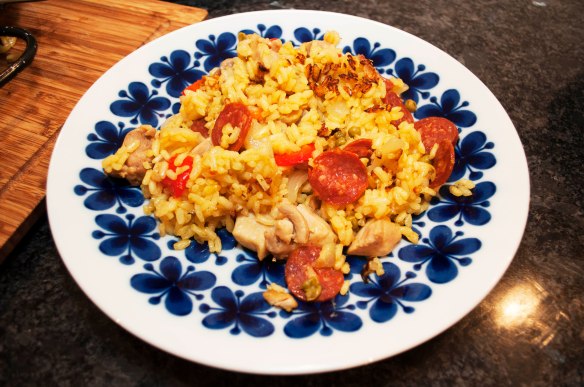 Note the toasted rice on the top of this dish

That crunch is an important textural element of paella

Feel free to change up the ingredients. Make it with seafood, or make a vegetarian version! 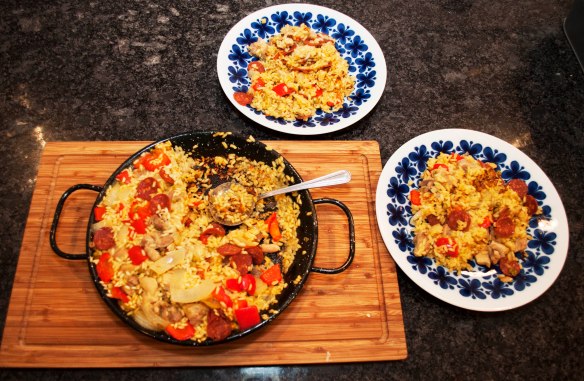 Just remember, however you make it, you’re gonna piss off a Spaniard!

Okay, so here’s the backstory …

In October 2013 I was lucky enough to get cast in a commercial that was shooting in Madrid, Spain. (Oh, yea … I’m a professional actor, doing commercials, TV, film, etc.). Like it is with most castings, you find out you got the job just days before you are filming, so this sudden trip to Madrid was not something that had crossed my mind.

My first thought … where exactly is Madrid?

Madrid, as it turns out, is smack dab in the middle of Spain. I can’t think of another big city I’ve ever visited that didn’t have some kind of waterfront. I knew nothing of what to expect. I spent a few days feverishly scouring the internet to find out all I could before I was off to the city for a week.

This is me when I have to get up at a very early hour to get a flight to Chicago, from where I will be getting a connecting flight to Madrid … 14 hours of travel, here I come!

Hmm, the airplane food isn’t terrible … and I’m on the Spanish national airline … this bodes well for what I’ll find there

So, after 14 hours of travel (including a Home Alone style run through Chicago O’Hare airport to not miss my flight from Chicago to Madrid), I finally arrive

After a car picks me up from the airport and drops me at the hotel, it’s a quick shower and then they need me in wardrobe … the driver just waits for me to get ready

It’s about 10am, (though my body thinks it’s much later) and we’re driving through a city that looks pretty damn cool … maybe I’ll even get to see it?

After a couple of hours getting fitted for outfits I would wear on the day, I’m told that I won’t be needed again until Thursday morning. I ask what they need me to do.

“Have you seen The Prado Museum? You should go see that!”  With that advice, I’m given my per diem and sent on my way. It’s Monday, it’s about noon, and I am free to explore this city, one which I never really had given much thought to,  for 3 days.  My first decision, get lunch!

In most restaurants in Madrid, there is a Menu del Dia served during the day. It’s a fixed price meal of usually a soup, main course and dessert with a drink (note, as you can see above, my included ‘drink’ is a bottle of red wine and a bottle of sparkling water to mix it with … yes, a bottle of each!). At about 9 euros for the entire meal, this is definitely the best way to eat while in Spain! 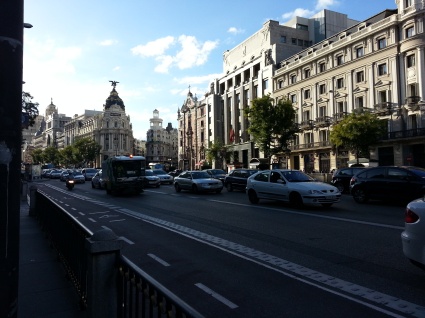 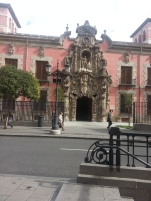 Walking around the city I couldn’t get over how much it reminded me of Paris … with a touch of Rome. I often describe it as what would have happened if Paris and Rome had a child.

All this walking is making me want to stop at cafe (cafeteria in Spanish) and get a lovely pastry and coffee! 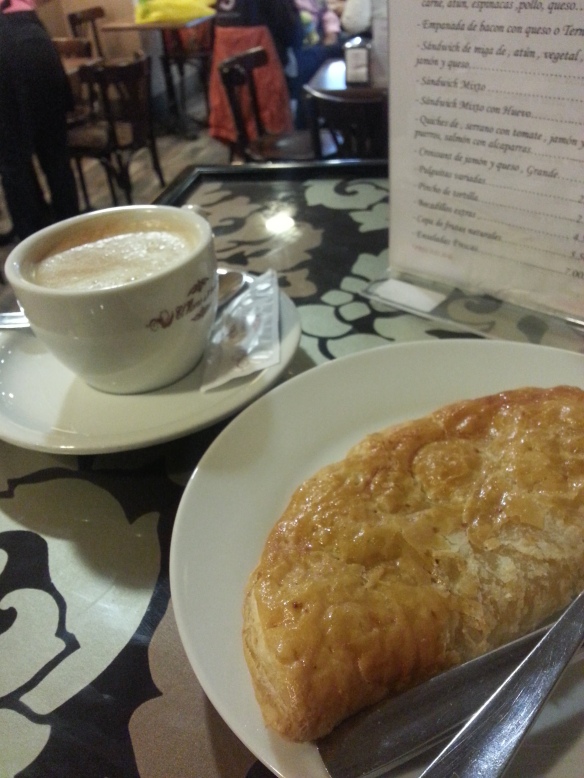 Okay, maybe I just get this out of the way with a mosaic off all my tasty coffee and snacks!

Do I know what all these things are called? Nope! I can tell you there’s a tuna pie, a dish that is basically cheese baked on bread and folded over … just good stuff

In the heart of the city is the stunning Retiro Park 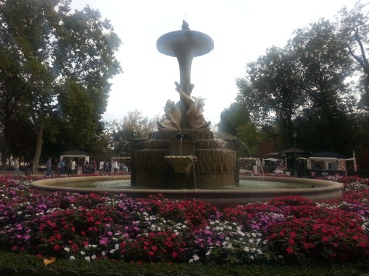 Located nearby are the 3 big art galleries … the Prado, Thyssen and Reina Sofia 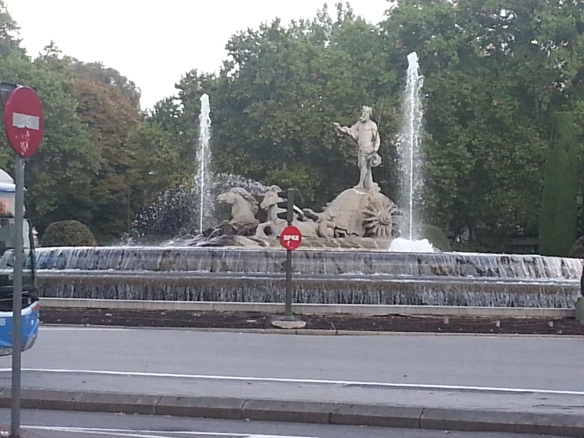 No pictures allowed inside … this is the amazing fountain across the street … of course, you didn’t think I wasn’t going to sneak pictures inside, right? 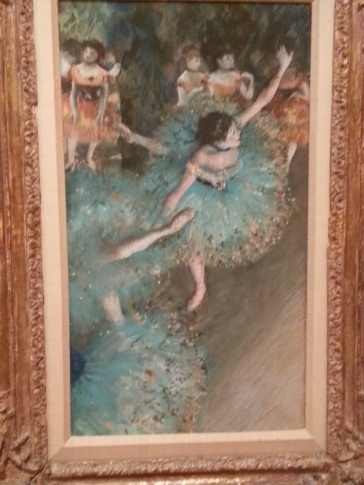 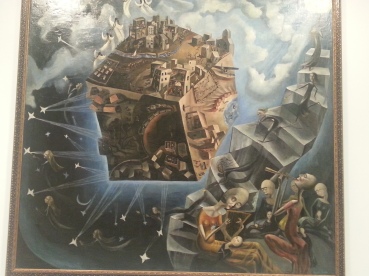 All that art was a bit overwhelming … time for a break 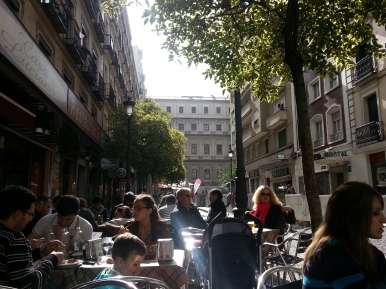 Beer and a lovely calamare bocadillo on a terrace … this will do!

In Madrid, everyone goes out for dinner all the time … after 10pm. The city really comes alive at night

Now, I wasn’t going to go to Madrid and not partake in some amazing paella. First, I had to find the right restaurant …

Yea, any place with a front window like this … I’m gonna try it

Served table side, with chicken, chorizo, saffron …  yes, this was amazing. Don’t worry, next post I’m going to show you how to do a paella at home!

Although I was given breakfast daily at the hotel 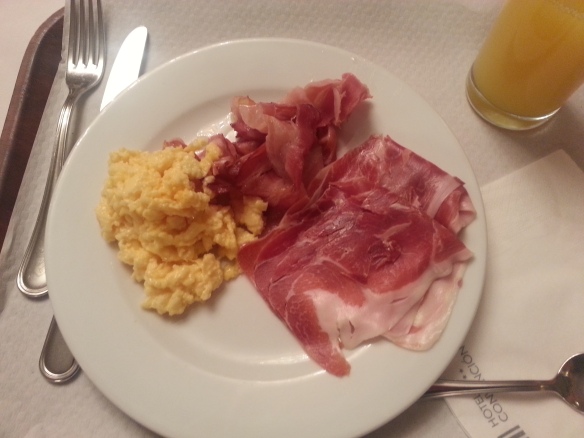 Churros y chocolate … yep, a cup of melted chocolate and a plate of hot churros to dip in the chocolate 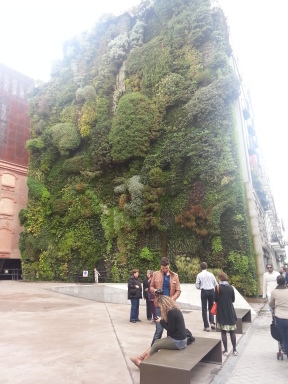 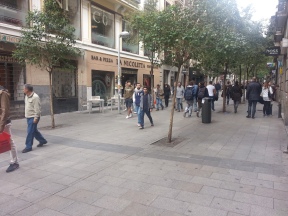 I got to see much in my unexpected week in Madrid, but obviously there is so much more. One day I plan to go back, this time take Claire … an amazing city that I had never really ever given much thought to, but now I think about it often.

In the morning, once I have had my coffee, I usually start to debate on whether I’d like something quick and easy to make for breakfast, or if I should do something “fancy”. This amazing recipe will let you do both!

Cheesy eggs with salsa and sour cream, served on a corn tortilla … you’ll look like a star!

Enough talking, I am hungry and want this already!

On medium-high heat, warm the tortilla until it’s getting a little brown. Flip and do same for other side. Place tortillas aside.

In a pan with some butter, on medium heat, get the eggs frying (don’t break those yolks!)

Put cheese on top of the eggs. Cover the white parts but try to leave the yolks uncovered

Let this cook and go back to your tortillas

Get that salsa and cover each tortilla, leaving a tiny bit of room from the edge

Get that sour cream and put a dollop in the centre of each tortilla, on top of the salsa

Now we’re ready for those eggs 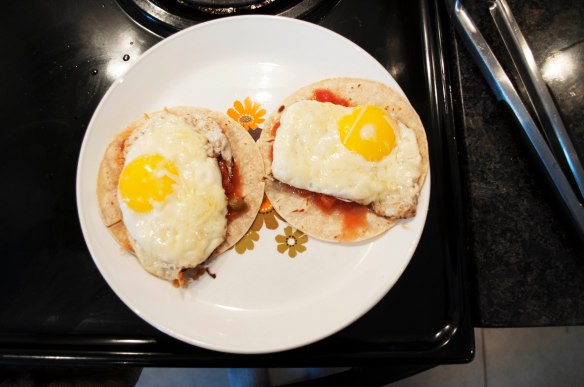 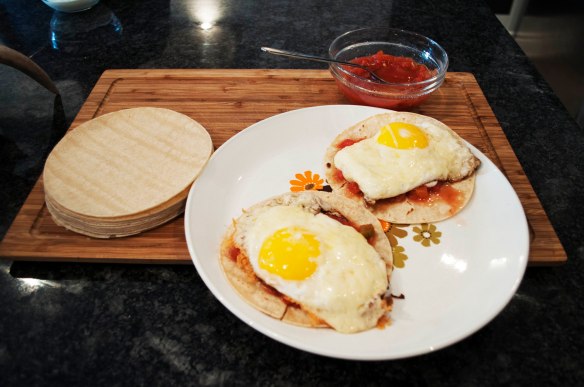 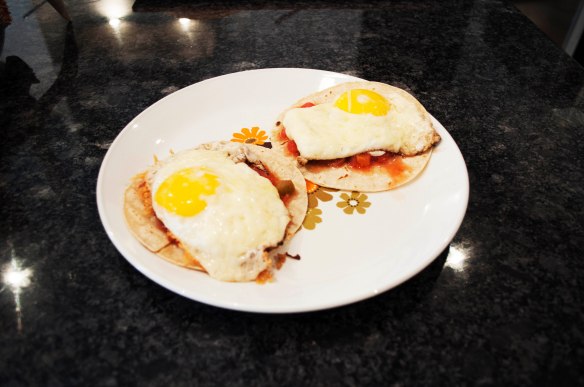 So there you have it, “Quick and Easy” Huevos Rancheros